What biases lie behind your narcotic prescribing?

Narcotic pain medication prescribing is an issue heavily laden with emotion these days.  I have observed that most doctors tend to fall on one side of a spectrum bordered by these two extremes:

"Undertreated pain is worse than addiction."
On one end is the doctor who is deeply, morally troubled by patients in pain.  This doctor is not unaware of the risk of addiction but is willing to risk being taken advantage of by a wily narcotic seeker rather than leave pain untreated.  This doctor knows that undertreated pain can tremendously decrease his/her patients' quality of life. He/she feels that relieving suffering is one of the most important responsibilities of a physician.

"Addiction is worse than undertreated pain."
On the other end is the doctor who is deeply, morally troubled by the possibility that he/she may contribute to someone's narcotic addiction.  This doctor is not indifferent to pain but is willing to risk undertreating pain rather than inadvertently create an addict.  This doctor knows that every single narcotic addict gets their ongoing pill supply, directly or indirectly, from a physician's prescription pad. He/she feels that preventing the misuse of these dangerous medications is one of the most important responsibilities of a physician.

Most docs naturally lean toward one end of that spectrum; they are more naturally inclined to either worry about pain or worry about addiction.  I'm not trying to suggest that one way of thinking is superior to the other, as pain and addiction are, of course, both terrible problems.

Doctors are merely imperfect human beings, and we will not always make the right decision about prescribing narcotics.  At times, we will not treat pain that we probably should, and, at times, we will prescribe narcotics for someone we probably shouldn't.  Which end of the spectrum we fall on might just determine which of those two outcomes is more likely for our own patients.

I lean more toward the "pain is bad" end, myself.  I hate to see people in pain, but, like most family docs, I've also been burned a few times by clever narcotic seekers. I have to constantly remind myself to remain vigilant in my efforts to detect narcotic abuse, as my natural inclination is to trust people until they've proven themselves untrustworthy.

I've shared these observations with the residents I work with, and they can usually describe which side of the spectrum they each prefer.  This self-awareness is important for us as docs; by recognizing our biases, we can consciously decide how much we will allow them to influence our decisions.

Better defining the values behind physician behavior may be a necessary step to improving care for both untreated pain and narcotic addiction.
Posted by Jennifer L. Middleton MD at 3:49:00 PM 1 comment: 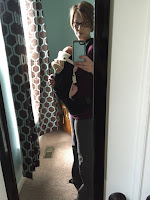